The 'Monty Python' comedian confirms he had undergone a minor operation on June 5, and praises his surgeon using a line uttered by the battle-weary Black Knight in 'Monty Python and the Holy Grail'.

AceShowbiz - "Monty Python" funnyman John Cleese is recovering from surgery after a cancerous tumor was removed from his leg.

The 80-year-old had a minor operation on Friday, June 05, and on Monday he updated fans via Twitter, cracking jokes about his health scare.

"Had a minor operation on Friday," he explained. "A surgeon cut a small cancerous bit out of my leg Very minor. At my age this sort of thing happens about once a week." 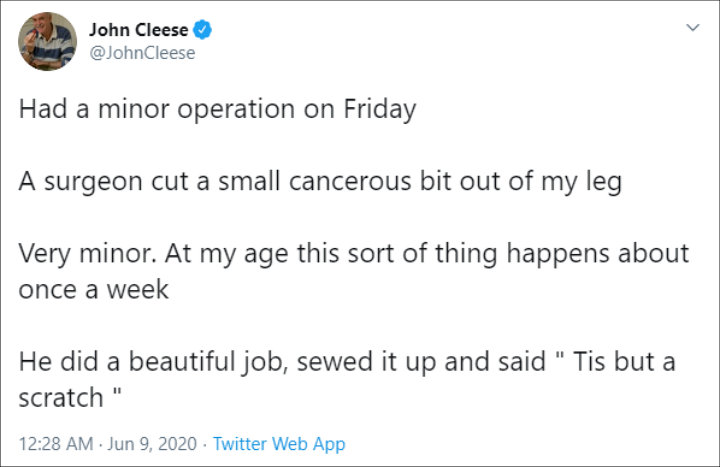 Cleese then heaped praise on the surgeon, adding, "He did a beautiful job, sewed it up and said, 'Tis but a scratch' " - a reference to a line uttered by the battle-weary Black Knight in Python comedy "Monty Python and the Holy Grail".

Evelyn Lozada Denies Being Physically Abused by Ex Carl Crawford: 'We Have a Positive Relationship'