Nick Rhodes and John Taylor crash the virtual event, staged to raise money for healthcare workers fighting the coronavirus pandemic in New York City, seconds after it appeared to end.

The band's hit "Rio" appears in both the stage show, which was about to open on the "Great White Way" in March when all productions were shuttered due to the COVID-19 pandemic, and the 2016 film of the same name, directed by John Carney.

Earlier on Thursday, the band tweeted, "Don't miss the cast of @SingStreetBway TONIGHT for their at home performance in support of charities fighting COVID-19. Nick & John are ready to rock with them... and send their support to @BCEFA (Broadway Cares) (charity)." 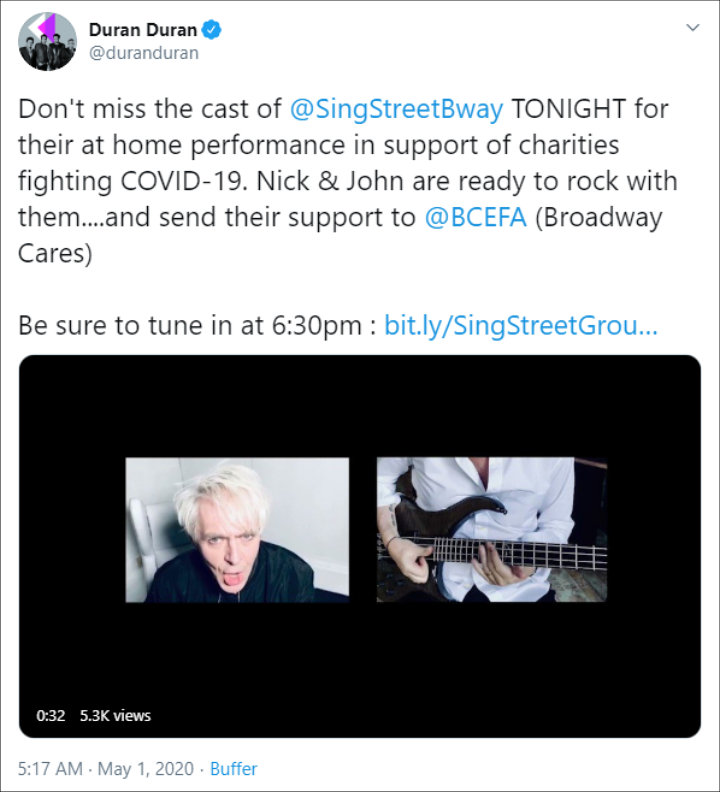 But the "Save a Prayer" hitmakers didn't let on that they would be making an appearance at the virtual event, staged to raise money for frontline workers in New York City.

Seconds after the livestream appeared to end - with the castmembers, all in self-isolation, stepping outside or opening their windows to clap for everyone playing their part in the healthcare battle in New York - Rhodes and Taylor popped up onscreen.

"Hey Conor, it's Nick Rhodes from Duran Duran and we're very happy to support Broadway Cares and the Mayor's Fund (of new York) in their fight against COVID-19," Nick said, addressing Sing Street's main character Conor, lead singer of the titular Dublin, Ireland band, played by Brenock O'Connor. Brenock was seen onscreen after the musician's shock appearance with his mouth open in shock.

Then, while strumming his bass guitar, John said, "It's John Taylor from Duran Duran. The work these workers are doing, these frontline fighters is crucial to getting our world back to being an ordinary world," referencing the British band's 1992 hit, "Ordinary World".

"Yeah," added Nick, "and we look forward to seeing you... on Broadway and we hope it's not too far away. Good luck."

If you missed the Sing Street livestream, check it out here: https://www.facebook.com/singstreetbway/.

Latto Claps Back at TikToker Saying She Had 'Attitude' During Concert

Madonna Reportedly Will Go on World Tour Next Year

Snoop Dogg and Dr. Dre Due to Release Duet Album 'Missionary' in November