Jason Alexander, 'Better Call Saul' star Michael McKean and 'Ugly Betty' alum Michael Urie are also among stars who pay tribute to the playwrights, who died from complications linked to the coronavirus.

The legendary writer behind hit Broadway productions like "Ragtime" and "Master Class" passed away in Florida on Tuesday (24Mar20) from complications linked to the coronavirus, and Hamilton creator and former star Miranda was among the first to honour his memory on Twitter.

"Heartbroken over the loss of Terrence McNally, a giant in our world, who straddled plays and musicals deftly," he wrote. "Grateful for his staggering body of work and his unfailing kindness." 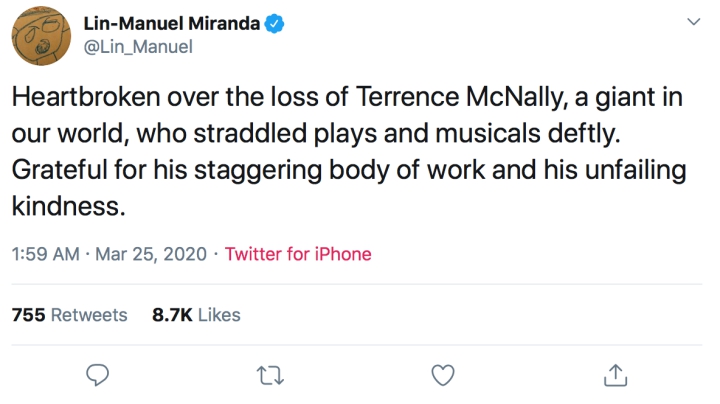 Seinfeld comedian Alexander, who appeared in the 1997 film adaptation of McNally's Love! Valour! Compassion! and featured as part of a tribute event in 2013, shared, "We lost a great artist today. I worked for and with Terrence McNally twice in my life and they were two of the greatest experiences I've ever had. His work was vital, intense, hysterical and rare."

"My hope is that he will inspire writers for years to come. #RIPTerrenceMcNally".

50 Cent Says People Will 'Get Fat' Amid Quarantine