The 'American Horror Story' actress has just found out that her new man already has a fiancee and a child after she posted pictures of him on social media.

AceShowbiz - Social distancing may have a new meaning for Angelica Ross and her boyfriend now. The actress has just found out that her new man wasn't that honest with her as he has another woman in his life, just when she felt happy to have found new love.

On Wednesday, March 18, the "Pose" star took to Twitter to share pictures of her with her new boyfriend as she shared about practicing social distancing with him amid the coronavirus pandemic. "Finally found him and have to distance myself from him ... an early test we're committed to passing," she captioned the photos. "I miss you B."

But a day later, Angelica updated her followers about her relationship with her new man with a plot twist. Crediting Twitter FBI, the openly transgender actress revealed that her boyfriend is already engaged and has a child. "The internet is AMAZING. I've been talking to the mother of his son and fiance all morning," she tweeted on Thursday. 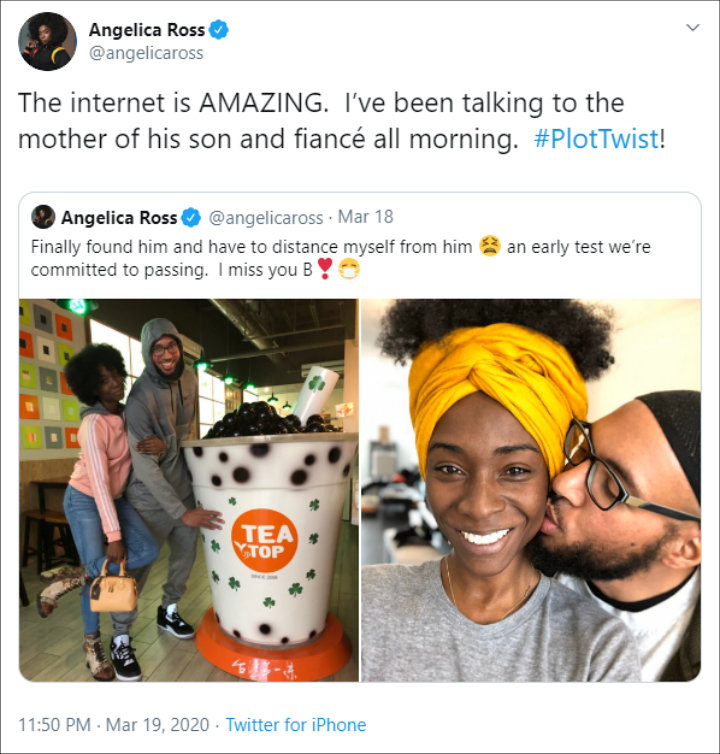 A fan of Angelica kindly summed up what has been going on to the actress' relationship with her boyfriend. "For those who don't get it. Queen Angelica found this man and was dating. She posted this on Twitter and we all REJOICED in excitement. Twitter FBI probably saw the tweet and told Angelica this man has a kid and is engaged. Angelica was talking to his fiance all morning," the fan tweeted.

Angelica also tweeted that she "might just spill the full tea on my IG live tonight," but then changed her mind. "I realize I am not in any condition to go LIVE on my IG tonight. Going to pray about it instead," she wrote, without saying what she was going to talk about.

Angelica was previously engaged to another man, but she called it off because her fiance did not want others to know that she's transgender. Not much is known about her latest boyfriend as she herself stated that the relationship was new before the expose.

Jimmy Kimmel All Smiles While Dancing With Daughter at Her Wedding