Ahead of Super Bowl LIV, Paula takes to Twitter to give a shout-out to the performers, but the photo she uses features Nicole instead of the Colombian singer.

AceShowbiz - Nicole Scherzinger has a perfect response to Paula Abdul's major mix-up. Ahead of Super Bowl LIV, the lead singer of The Pussycat Dolls was mistaken for Shakira by the former judge on "The X Factor", but has kindly sent love to her ex-colleague as she corrected the blunder.

On Sunday evening, February 2, Paula set internet abuzz when she shared her excitement over the performances of Shakira, Jennifer Lopez and Demi Lovato at the big game in Miami. "Can't wait to watch these amazing women perform at the #SuperBowl," she wrote, tagging this year's headliners of the Halftime Show as well as the "Sober" singer, who was tapped to perform the National Anthem.

The photo the 57-year-old singer posted alongside the now-deleted note, however, featured Nicole instead of Shakira. Fortunately, Nicole adopted a positive attitude to the mix-up as she replied, "I mean, my hips don't lie… but I'm not @shakira babes," adding a kiss and a heart emoji. 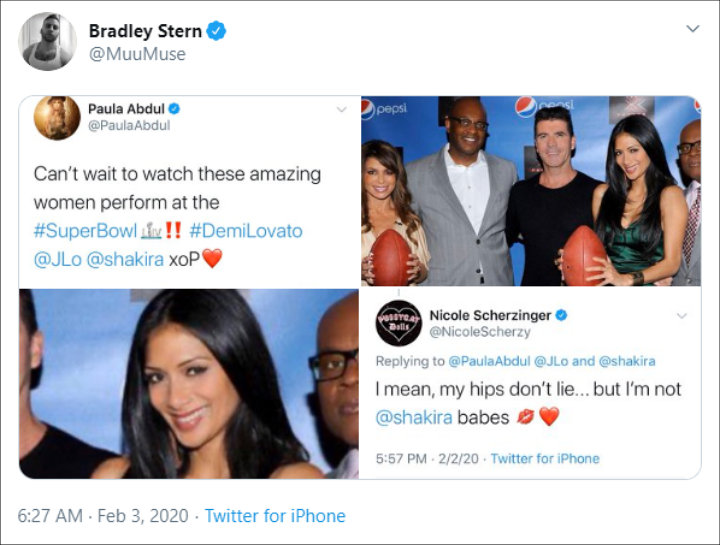 Still, some fans were not as kind as Nicole. "Paula Abdul disrespecting the legendary name of Shakira by posting a photo of Nicole no sweetie no," one social media user tweeted. Another chimed in, "Paula posting an old picture with Nicole Scherzinger and thinking its Shakira is." A third sarcastically replied, "Paula…. that aint… nvm." 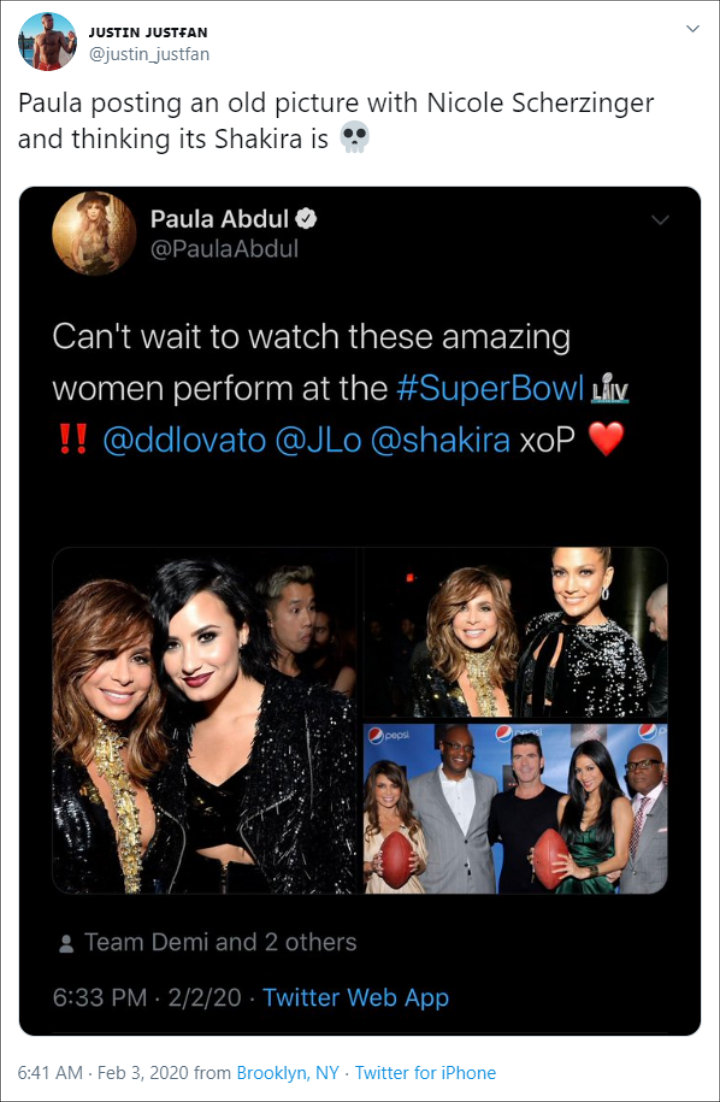 Another user who replied back at Paula.

Paula and Nicole have worked together back in 2011 when the "Opposites Attract" hitmaker served as a judge on "The X Factor" and the "Baby Love" singer took the co-host role. While neither has ever headlined Super Bowl halftime show, the former debuted "Dance Like There's No Tomorrow", her first single in 12 years, during the pre-game show in 2008.

Super Bowl LIV saw the Kansas City Chiefs taking home their first trophy a half century after winning their first.Overcoming a 10-point deficit in the fourth quarter, the team led by quarterback Patrick Mahomes defeated the San Francisco 49ers 31-20 at Hard Rock Stadium. Meanwhile, the halftime show presented energetic dance moves and medley of hit songs from both Jennifer and Shakira.

Actress Rae Dawn Chong Admits to Sleeping With Mick Jagger at 15: 'I Knew What I Was Doing'