The 'Uncut Gems' actor manages to poke fun at missing on the Best Actor nomination, but his co-star in 'The Waterboy', Kathy Bates, insists that he 'was robbed.'

AceShowbiz - Adam Sandler is relieved he was snubbed at this year's Academy Awards, joking he can now retire his suit.

The comedian received Best Actor buzz for his role in 2019 crime thriller "Uncut Gems", but he was not on the shortlist for the category on Monday, January 13, when the list of Oscar nominees was released.

The star moved on to congratulate his colleagues who did receive Oscar nominations, pointing to Kathy Bates in particular, who earned a Best Supporting Actress nod for her work in director Clint Eastwood's terrorist attack drama "Richard Jewell".

"Congrats to all my friends who got nominated, especially Mama," Adam wrote, referring to Kathy's role as his mother in his 1998 sports comedy "The Waterboy".

Responding to the sweet tweet, Bates replied to her movie son, "I love you my Bobby Boucher!!! You was (sic) robbed!! But Mama loves you...!!!" 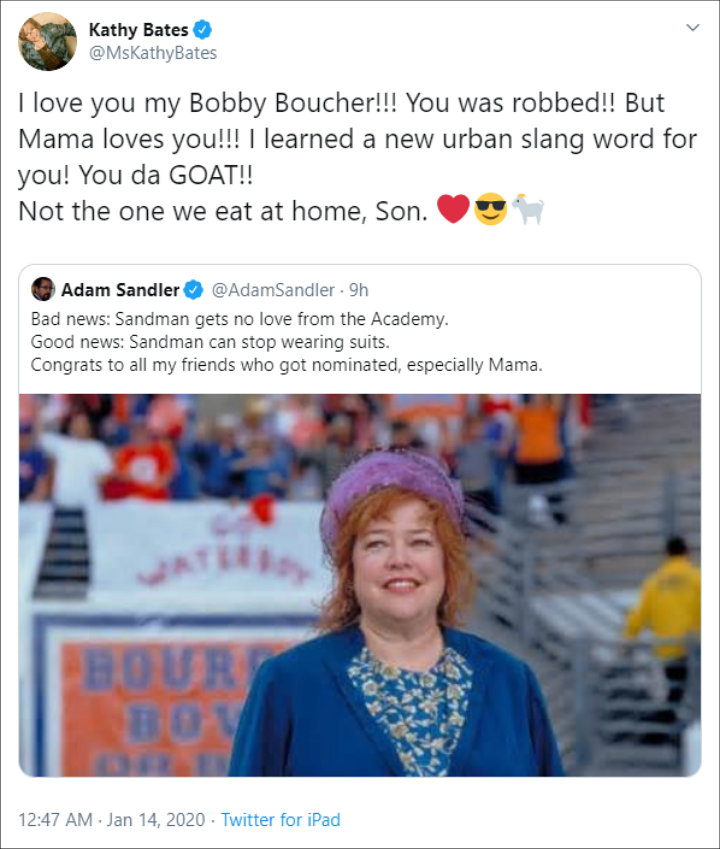 Oscars 2020: 'Parasite' and 'Pain and Glory' Make It Into Best Foreign Film Shortlist