Also mourning the sudden passing of the singer/songwriter, who died of natural causes at the age of 75, are 'Doctor Who' writer Mark Gatiss and filmmaker Edgar Wright.

AceShowbiz - John Cleese is leading tributes to the man affectionately known as the seventh member of the Monty Python comedy troupe following his death on Sunday night (December 29).

Singer/songwriter Neil Innes passed away at the age of 75 and Cleese has taken to social media to offer up his thoughts about the British musical comedy icon's death.

"Utterly dismayed to hear about Neil Innes," the funnyman wrote. "Right out of the blue... A very sweet man, much too nice for his own good. Lovely writer and performer." 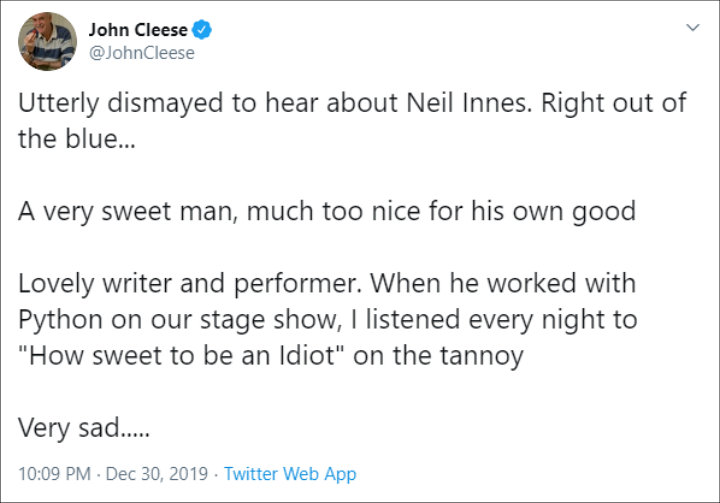 Innes teamed up with his future The Rutles bandmate Eric Idle to write much of the music for Monty Python's albums, while he performed and penned songs and sketches for the comedy team's final TV series in 1974. He also wrote songs for the film "Monty Python and the Holy Grail", appeared in the cult comedy "Life Of Brian" and toured with the troupe.

"When he worked with Python on our stage show, I listened every night to 'How sweet to be an Idiot' on the tannoy," Cleese added, referring to one of his favourite Innes songs.

Innes was also a member of Bonzo Dog Doo-Dah Band, who scored a big hit with the quirky "I'm The Urban Spaceman", winning Innes an Ivor Novello songwriting award.

Actor and "Doctor Who" writer Mark Gatiss also paid tribute to Innes via Twitter, stating: "As a Python-obsessed teen I saw him at Darlington Arts Centre & missed my bus home to catch his brilliance. I used to record (radio show) The Innes Book of Records... & marvel at his talent. I still hum 'I like Cezanne, says Anne'. Sweet dreams, sweet idiot."

Meanwhile, filmmaker Edgar Wright added: "If it's true that the great Neil Innes had sadly passed away, please let me raise a glass to the man. Forever a fan of The Bonzo Dog Doo Dah Band." 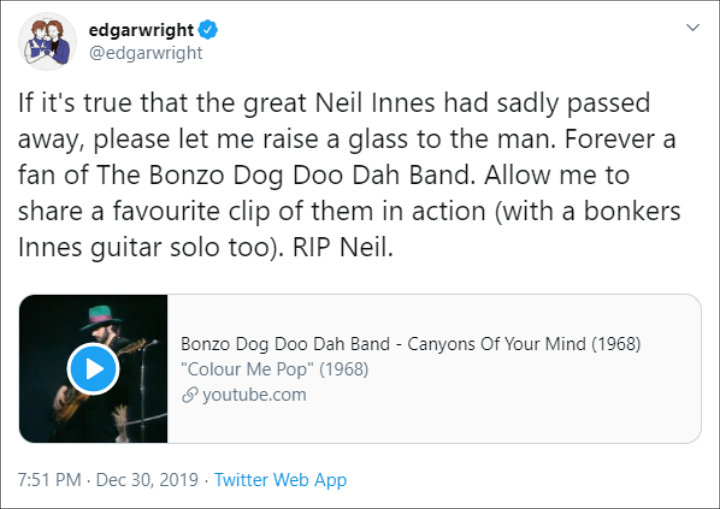 In a statement, a spokesman for Innes' family reveals the comedy legend "died of natural causes quickly without warning and, I think, without pain."