Cardi B Is Accused of Photoshopping Her Waist, She Responds

The 'Bodak Yellow' rapper bares her toned abs after getting accused of digitally altering her picture from the recent Ghana concert to make her waistline look smaller.

AceShowbiz - Cardi B faced accusations that she digitally altered her picture on Instagram to make her waistline look smaller. It was a picture of the 27-year-old rapstress rocking a latex bodysuit. She wore vibrant African colors for her concert in Ghana over the weekend.

Those accusing her of photoshopping the image pointed out the striped curtain which appeared to curve right around her waist and thigh in the background. The Instagram picture was also placed next to an image of her from the December 8 concert to further show the difference.

"Did @iamcardib think we really weren't gonna spot that bad photoshop? Look at the curvy curtains loool #fail," one commented. Another wrote, "This looks a fkn mess it's too much going on." Meanwhile, this person laughed, "LMFAOOOOOOOOOOOOOOOOOOO i know she didn't post this."

A few, however, came to the "Hustlers" actress' defense. One individual argued, "Isnt she just leaning against the curtain causing it to bend a bit? This seems like a reach." Another person left a similar comment, "It is a curtain it could be looking like that cause she hit it."

Cardi B hasn't directly commented on the internet chatters, but she was seemingly aware of them and might have given a subtle response. Amid the accusations, she posted a new picture where she opened wide her robe to reveal her toned abs in a Ghana flag-themed outfit. "Instead of I was in Ghana for less then 24 hours .Went thru a lil dilemma but I still had fun," she wrote in the caption.

The rapper's trip to Ghana was also marred by criticisms from local celebrities. Media personality Afia Schwarzenegger said she and some other celebrities were invited to meet the rap star at her hotel, but the hip-hop star never showed up and, instead, lounged by the poolside 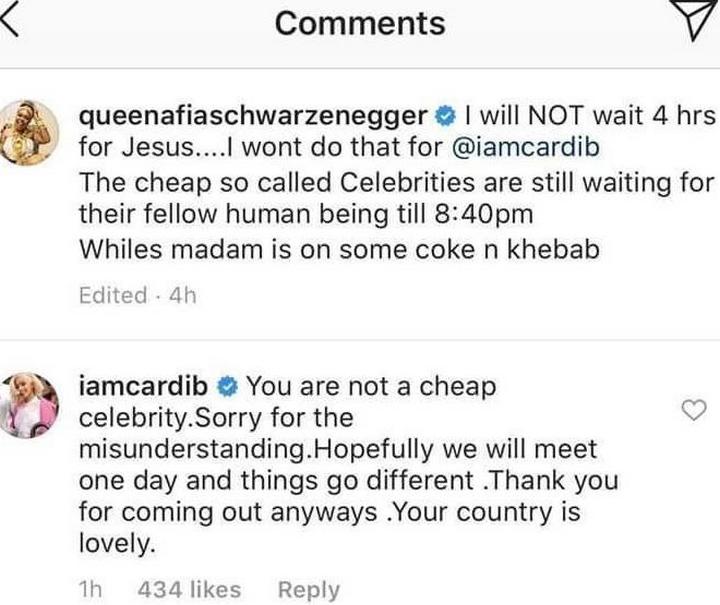 Cardi B responds to criticism by Ghanaian celebrity

"I will NOT wait 4 hrs for Jesus … I wont do that for @cardib," she wrote on Instagram. "The cheap so called Celebrities are still waiting for their fellow human being till 8:40pm whiles madam is on some coke n khebab." Cardi responded, "You are not a cheap celebrity. Sorry for the misunderstanding. Hopefully we will meet one day and things go different. Thank you for coming out anyways. Your country is lovely."

Brad Pitt Says None of Romance Rumors About Him Are True