Many people are coming after the Young Money female emcee as they believe that she is disrespecting black people by referring to them as the 'blacks' on the blue bird app.

AceShowbiz - Nicki Minaj got herself in trouble over a tweet she posted on Tuesday, November 5. The Trinidadian native was responding to a clip of TV hosts talking about her savage clapback against Wendy Williams, but her words choice rubbed many people the wrong way.

It all started after Nicki noticed a clip of "E! Nightly Pop" hosts mentioning her feud with the 55-year-old personality before revealing a short audio clip of Nicki shading Wendy. On the clip, Nicki could be heard saying that Wendy unknowingly paid for her estranged husband Kevin Hunter's mistress' lifestyle. The "Anaconda" rapper apparently was delighted by how the hosts covered the story and she let her feelings known on Twitter. 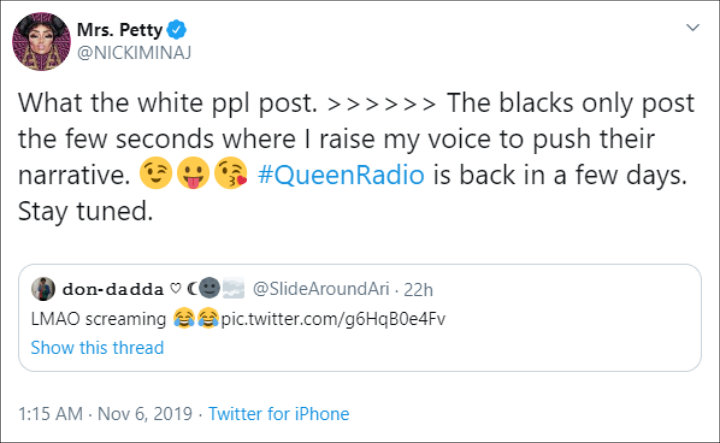 She said on the micro-blogging site, "What the white ppl post. >>>> The blacks only post the few seconds where I raise my voice to push the narrative," before suggesting that she's ready to speak more of her mind about their feud. "#QueenRadio is back in a few days. Stay tuned," so Nicki wrote.

However, people were not as happy as Nicki, especially because she chose to refer to black people as the "blacks." They got more upset because Nicki still referred to white people as "white ppl," prompting people to deem her post as an "anti-black" tweet. "Why do artist continue to disrespect black people as if we didn't get them where they are," one wrote, as some others urged Nicki to delete the tweet.

There was also one who said, "You know what... I love your music. But the fact that you said 'white ppl' and then refer to us as 'the blacks' just furthers the idea that 'blacks' aren't people. That's an idea that goes wayyy back. I'm mad hurt. Unconscious ideas are a mf. You gotta be aware of what you saying." An individual commented, "As a Person of Color who have been supporting her for long. This is offensive and not funny..."