Teyana Taylor's Husband Iman Shumpert Caught on a Date With Another Girl - Cheating?

The NBA star is allegedly pictured during a double date with his brother and two exotical girls at Halloween Horror Nights in Los Angeles, but his wife might not be upset about it.

AceShowbiz - Iman Shumpert has been accused of cheating on Teyana Taylor. The professional basketball player was recently caught with a girl who was not his wife during what was called a double date with his brother and two exotical girls.

The 29-year-old athlete, his rumored side chick, as well as his brother and his brother's girlfriend reportedly visited Halloween Horror Nights in Los Angeles this past weekend. Posting pictures of the foursome's outing, a blog noted that this might not be an issue for Iman's wife. "Not that teyana cares or anything," the blog wrote along with the photos, adding that the couple may have an "open marriage." 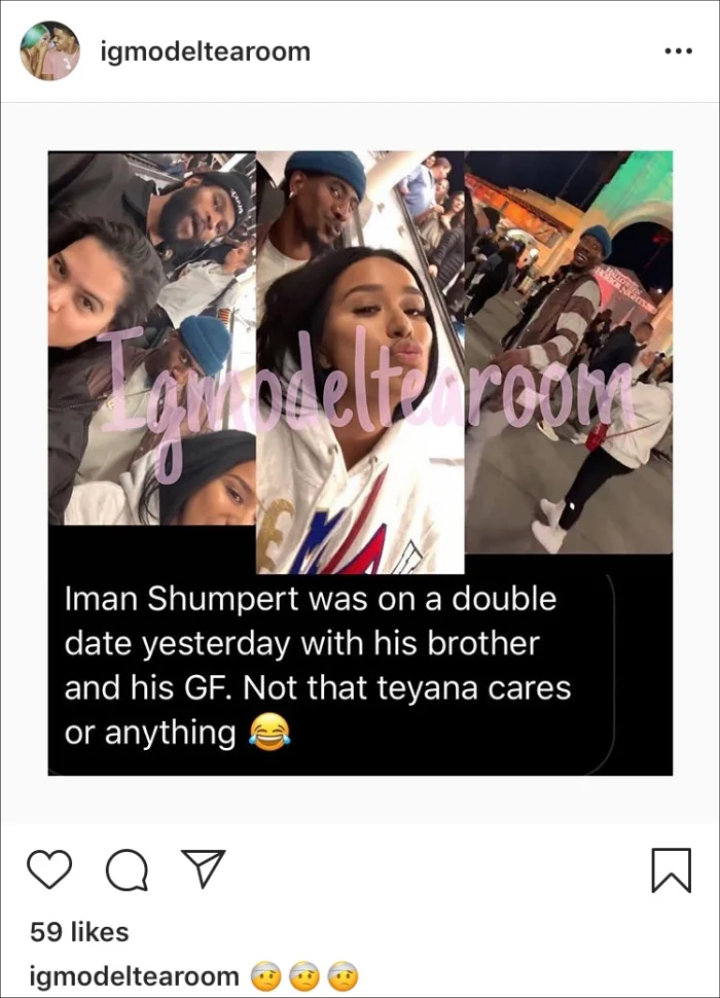 Iman Shumpert is accused of cheating on Teyana Taylor.

While it has not been confirmed if Iman indeed went on a double date with another girl that night, Teyana has previously opened up about engaging in threesomes with Iman. During a recent visit to Hot 97, she admitted to have occasionally welcomed other women into their bedroom.

"I think that's the mix up. People [think] like everyday we taking down b***hes down," she set things straight. "That's not that. It be those times...like when we on vacation, our anniversary, like certain times [only]."

Back in 2016, the pair who have been married since October 2016, were also hit with cheating allegations. Assuring that they're still together despite the rumors, Iman posted on Instagram at the time, "I was young. I was selfish. I've broken hearts and been insensitive to them. I never really cared what the Internet said of me until now and it's not because they're antagonizing me...they are now directing hate toward a woman that gives off nothing but positive energy and deserves nothing more than the world that I vow to give her."

"It ain't no breaking up. Junie's gonna grow up with both her parents and siblings," the Houston Rockets player said of their daughter in another post. "The bitterness will get you no where. Just spread love."

Teyana and Iman welcomed their daughter in 2015.

P. Diddy Floods Lori Harvey's Instagram With Likes After She Unfollows Him

Teyana Taylor's Husband Iman Shumpert Caught on a Date With Another Girl - Cheating?