AceShowbiz - Antonio Brown has been slapped with a civil lawsuit by a former trainer accusing him of rape. Britney Taylor, whom the athlete first met while they were attending Central Michigan together and whom he later hired as a trainer, claims the NFL star sexually assaulted and raped her during three separate encounters.

According to the federal lawsuit filed Tuesday, September 10 in the Southern District of Florida, Britney says the first incident happened during a training session in June 2017, when Antonio "exposed himself and kissed [her] without her consent" at his home in Pittsburgh.

The 31-year-old wide receiver allegedly reached out to Britney several months later and "begged forgiveness." She then agreed to continue training him, but around a year later in May 2018, he allegedly "forced her down onto a bed, pushed her face into the mattress, and forcibly raped her" after a night out at a Miami-area club.

"As a rape victim of Antonio Brown, deciding to speak out has been an incredibly difficult decision," Britney, 28, says in a statement released by her lawyer. "I have found strength in my faith, my family, and from the accounts of other survivors of sexual assault."

Antonio has denied the rape allegations against him. In a statement posted by his attorney Darren Heitner on Twitter, he claims that "the accuser engaged Mr. Brown in a consensual personal relationship" and that "any sexual interaction with Mr. Brown was entirely consensual."

"Mr. Brown denies each and every allegation in the lawsuit," reads part of the statement. "He will pursue all legal remedies to not only clear his name but to also protect other professional athletes against false accusations."

Darren suggests that the rape allegations were her attempt to retaliate after Antonio refused to invest $1.6 million in Britney's business project in 2017. The lawyer also alleges that Britney tried to financially benefit from his status as a celebrity by posting multiple photographs of the athlete on her social media page. 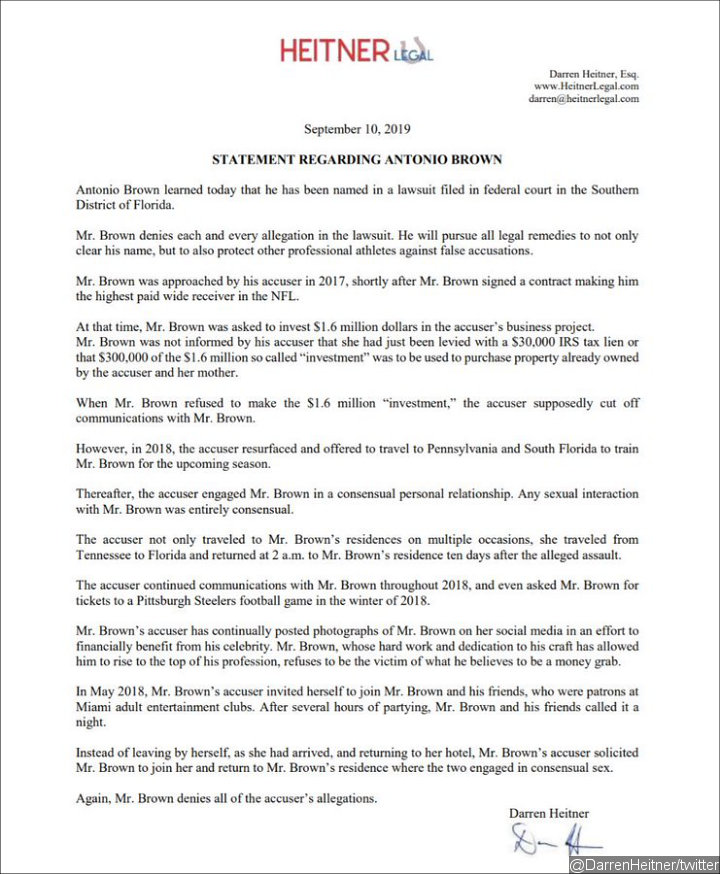 The lawsuit comes a day after Antonio signed a 1-year contract worth up to $15 million with the New England Patriots, with a $9 million signing bonus.

Farrah Abraham on Future Partner: He Has to Love My Daughter and Sign on NDA

Antonio Brown's BM Lurking on His New GF's Instagram, Saying He Begs Her to Marry Him