When Patrick J. Adams, the on-screen husband of the Duchess of Sussex, makes a reappearance on the show, he offers an update on how her character, Rachel Zane, has been doing.

Meghan was best known for her role as Rachel Zane in the legal drama when she met and married British royal Prince Harry, prompting her exit from the hit show in season 7, with her last episode airing in April last year (2018).

Since then, there has been constant speculation she could return to the series – which is in its final season - in a cameo role.

However, on Thursday, August 15 her on-screen husband Mike Ross, played by Patrick J. Adams, made a reappearance in show and, when asked how Rachel's doing, he shared, "If I told you how good, you probably wouldn't believe me."

"Suits" tweeted a clip of the episode, captioning it, "Turns out Rachel is doing REALLY well," alongside a winking emoji, acknowledging the subtle reference to Meghan's new life as a member of Britain's royal family. 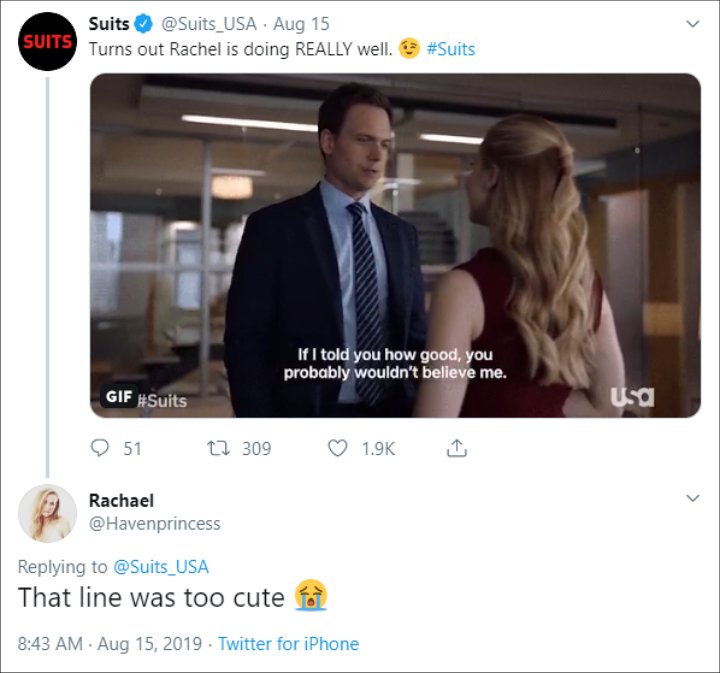 "That line was too cute," said one viewer, while another wrote, "We know she's married to our UK Prince Charming."

Patrick previously spoke to Entertainment Tonight about how the show is keeping Rachel in the loop.

"For Mike this is just a trip to New York. There's phone calls with Rachel saying goodbye and I love you, and y'know I think there's some obvious acknowledgement that she's still there and a part of the show," he said. "This is just a way for him to come see his friends one last time."

Patrick and his wife Troian Bellisario were among Meghan's "Suits" co-stars invited to her wedding at Windsor Castle last May.