Meanwhile, a family of the Echosmith drummer has released a statement revealing that the 20-year-old musician has autism spectrum disorder and explains that his interaction with 13-year-old Alabama Barker has been 'misunderstood.'

AceShowbiz - Travis Barker's daughter has forgiven Graham Sierota after exposing his allegedly inappropriate messages to her. On Friday, August 2, Alabama Barker took to Instagram Stories to address the situation after the Echosmith drummer apologized for direct-messaging her.

"Hey guys! I am posting on behalf of the drummer of Echosmith !" Alabama posted on her account. "He had dmed me a while back in 2016 and then once again in July saying I was beautiful and invited me to a bbq at his house. He is very sorry about the situation and regretful." The 13-year-old added, "I forgive him and would like for this all to be over." 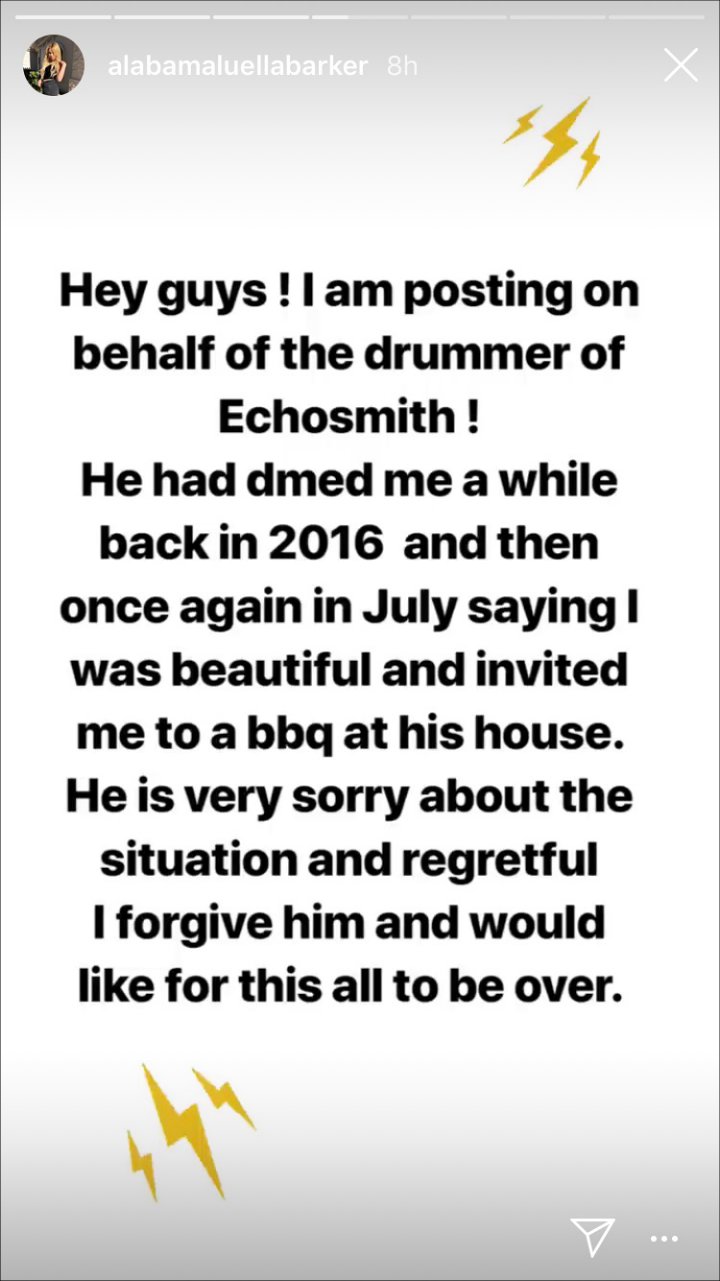 Graham's family has also released a statement, revealing that the 20-year-old was diagnosed with Autism Spectrum Disorder as a child and has difficulty understanding social cues. "We have never publicly addressed this in the past, but given the events of the last few days, we feel compelled to speak out now to offer some additional context and insight into the unfortunate misunderstandings that occurred and clear up the deeply hurtful mischaracterizations of Graham," the statement read.

It continued to read, "Graham's challenges have always been a non-issue in our family. In fact, it is a truly beautiful and wonderful thing that makes Graham the amazing brother, son and friend that he is. His outlook on life inspires us every day."

Describing Graham as a friendly person, the family went on explaining, "Anyone who has ever met Graham will agree, he is the friendliest and most kind-hearted, welcoming person in the world. We understand that his interactions were misinterpreted and misunderstood in the confusing world of social media, and we are deeply sorry. Graham certainly never meant to make anyone feel uncomfortable."

The family concluded the statement by saying that they would "continue to work with him to have the right tools and knowledge about social boundaries, and to better navigate and utilize social media while he takes a break from it. We hope anyone who's been affected, and in turn felt uncomfortable, can accept our deepest apologies."

Previously, Travis called out Graham for his "predatory behavior" after Alabama shared screenshots of his direct messages to her. The Blink-182 drummer said in a statement to The Blast, "When I found out a 20 year old man was trying to get in touch with my 13 year old daughter by filling her Instagram messages with party invites and compliments I was disgusted. ... That's predatory behavior and there is nothing cool, normal or ok about it at all."

Graham then apologized for his mistake, insisting that he had no idea Alabama was so young. "I had invited Alabama to my parents' big family BBQ along with many other people, and it wasn't until she responded that I realized her age at which point I apologized to her," he said in his own statement.

He added, "I'm really sorry and feel very badly about this. I didn't realize she was a minor and assumed she was my age. I made a careless mistake and this is a big lesson for me. I would like to apologize again to Alabama, her dad Travis, and her family."

Keyshia Ka'oir Hints She and Gucci Mane Are in Baby-Making Mode: It's Time to Get Off Birth Control