Cardi B Counters Troll Criticizing Her Support for Bernie Sanders

The U.S. presidential candidate himself, who failed to win the Democratic candidacy in 2016, has tweeted his gratitude for the 'Bodak Yellow' hitmaker's endorsement of his campaign.

AceShowbiz - Cardi B has silenced a troll who called her out for supporting U.S. presidential candidate Bernie Sanders online.

The outspoken rapper endorsed the American senator, who failed to win the Democratic candidacy in 2016, on Tuesday, July 16, pointing attention to his work in civil rights over the years.

"I been reading about Bernie Sanders and I'm really sad how we let him down in 2016. This man been fighting for equal rights, HUMAN rights for such along time (sic)," she wrote on Twitter.

Cardi's endorsement met swift criticism from an online troll, who took aim at the "Bodak Yellow" star for complaining when 40 per cent of her income was taxed by the government.

"Cardi B complained about paying too much in taxes, then endorses Bernie, who will raise taxes on the rich to fund his extreme socialism," the critic wrote.

The "Money" hitmaker spotted the backlash and was swift to respond, insisting paying high taxes isn't the problem if she knows her money is going to make a positive impact in society.

"I don't mind paying taxes if I see on what am I paying my taxes on (sic)," she tweeted in response to the critical fan. "Its (sic) sad that we pay so much taxes yet we don't have free college education neither free healthcare." 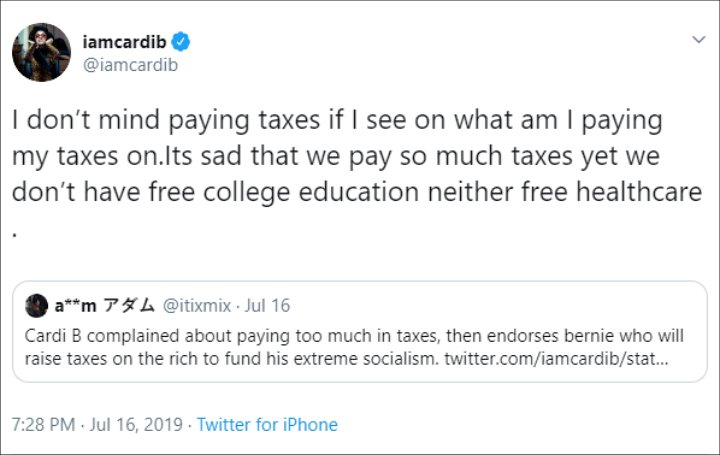 Meanwhile, Sanders spotted Cardi B's endorsement of his campaign, and thanked her for backing him.

"Thank you @iamcardib! Our fight for justice is far from over and we are not giving up," the senator tweeted. 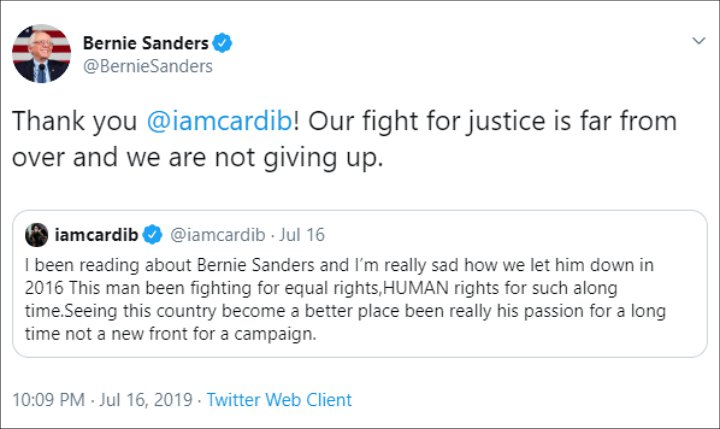 Cardi isn't the only rapper stumping for Bernie - Run the Jewels star Killer Mike is a big supporter, joining the senator on the campaign trail when he was running to become the Democrats' presidential hopeful against Hillary Clinton. He missed out on the vote and Clinton lost the race to the White House to current U.S. leader Donald Trump.