In the unreleased photo, the Duke and Duchess of Sussex are coupling up with the new mom resting one of her hands on her husband's chest while smiling brightly to the camera.

AceShowbiz - It seems like Prince Harry has a special reminder of his wife Meghan Markle even outside their home at Frogmore Cottage. The Duke of Sussex recently had a solo duty at his former residence at Kensington Palace, and people noticed one sweet tribute to Meghan inside the palace.

Harry was scheduled to meet Nepal's Prime Minister KP Sharma Oli on Tuesday, June 11. In a photo from the meeting, both the British prince and the Nepal prime minister were featured smiling as they sat together at adjoining couches. 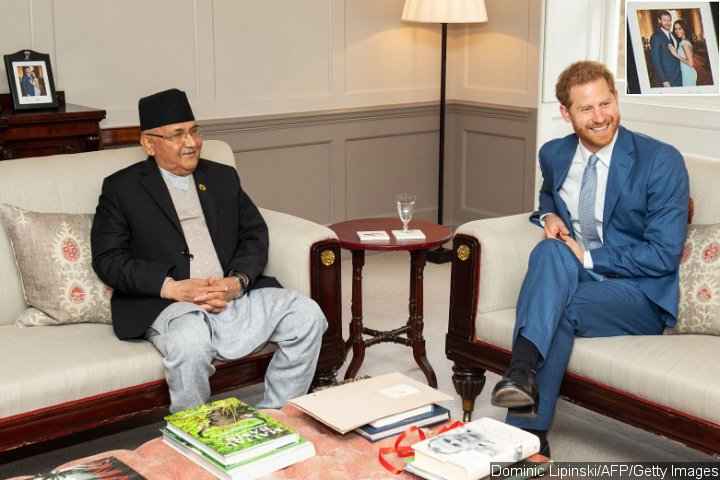 However, one thing that stole people's attention was a framed photo of Harry and Meghan which was placed on the drawer behind the coach. It featured an unreleased photo which saw Harry flashing his smile while wearing a suit. The Duchess of Sussex, meanwhile, was seen looking elegant in an off-the-shoulder, light blue dress. The former "Suits" actress rested a hand on her husband's chest while smiling brightly to the camera.

The photo was taken by photographer Alexi Lubomirski in December 2017 and was part of the series of images for the pair's engagament announcement.

The Sussexes, who are parents of their newborn baby Archie Harrison, celebrated their first wedding anniversarry on May 19. Meghan debuted a special diamond eternity ring while attending the Trooping the Colour parade on Saturday, June 8. According to a source, the new band was an anniversary gift from Harry which symbolizes never-ending love and usually is presented to a spouse for an extra-special anniversary.

At the royal engagement, Meghan looked regal in a navy blue ensemble by Givenchy with a matching navy cocktail hat. "She looked beautiful and radiant," a fan raved. The Duchess completed her style with a peacock blue Givenchy quilted bag and emerald-cut earrings.