Accessories chain Claire's recalls the YouTube sensation's exclusive cosmetic line after the Food and Drug Administration issued a warning to buyers over positive tests for asbestos.

AceShowbiz - Singer and YouTube star JoJo Siwa's makeup line has been pulled from stores after tests revealed traces of asbestos.

The 16-year-old teamed with bosses at U.S. accessories chain Claire's for an exclusive makeup kit containing eyeshadow, lip glosses and nail polish, but fans of the online sensation have been let down after representatives for the U.S. Food and Drug Administration (FDA) labeled the product unsafe.

Last week (ends June 07), bosses at the FDA issued a warning via Twitter to those who had already purchased the cosmetics and announced the kits would no longer be available for sale.

"Today, the FDA is releasing new results from its continued testing of cosmetic products for asbestos & is warning consumers to not use 2 additional products that have tested positive for asbestos & have been recalled," the statement read. 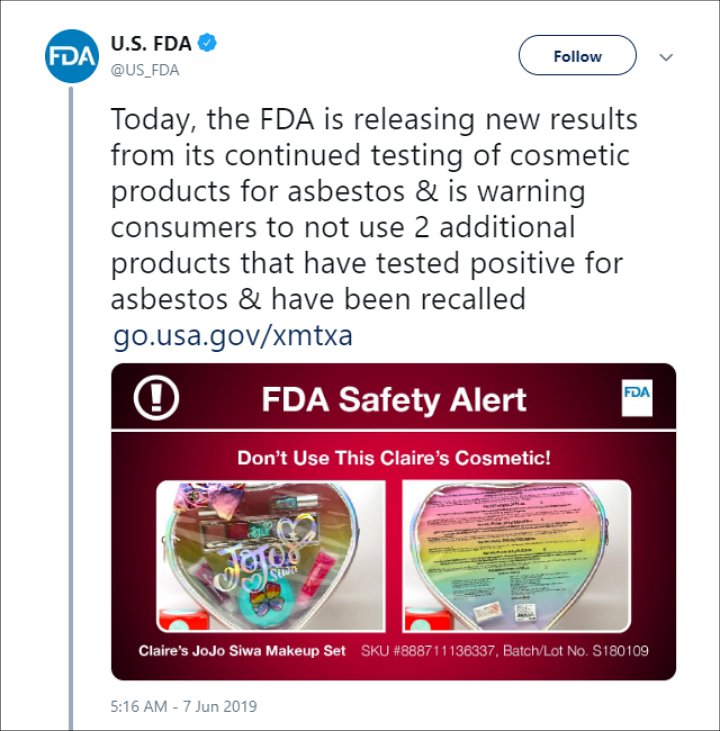 Siwa rose to fame after appearing on the U.S. reality show "Dance Moms" and later started her own YouTube channel, of which Kim Kardashian and Kanye West's daughter North West is a fan.

The young star, currently touring the U.S. with her "D.R.E.A.M" show, has yet to comment on the recall.

JoJo Siwa Credits 'Amazing' Girlfriend for Inspiring Her to 'Come Out'