The daughter of late Michael Jackson finds herself under attack on social media after she reveals how she came up with the recipe idea for her 'spaghetti grilled cheese sandwiches.'

AceShowbiz - Model and actress Paris Jackson is hitting back at social media trolls after she was branded a "druggie" and a "degenerate" for her marijuana use.

The daughter of the late King of Pop, Michael Jackson, was targeted by Twitter users after coming clean about the origins of an odd snack she had created and boasted about online.

After one follower wondered "how the heck" Paris had come up with the recipe idea, she replied, "m a r i j u a n a" - but her answer didn't go down well with one particularly unimpressed follower.

Paris credited marijuana as her inspiration for the dish.

"Druggie. I bet you do meth too," the troll tweeted on Tuesday. "Your dad must be ashamed of you. Degenerate."

Paris, who lives in California, decided to repost the rude message on her Twitter timeline and took the opportunity to fire back, responding, "because an organic medicinal plant from mother earth with dozens of healing properties that is legal where i live and used to help suffering people around the world = meth."

The 21-year-old then defended her use of cannabis, revealing her doctor suggested she give it a try to treat a variety of ailments.

"instead of taking poisonous addictive pharmaceuticals, this incredible medicine from the earth has been prescribed to me to help with my depression, anxiety, ptsd (post-traumatic stress disorder), and insomnia." 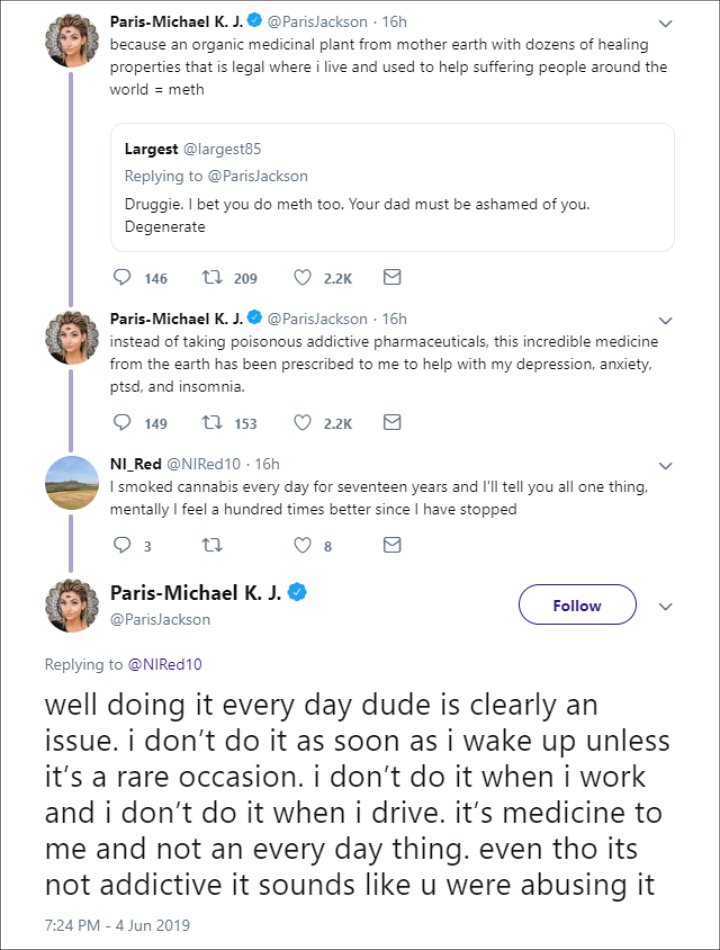 She defended her personal use of marijuana.

The young star, who lost her father to a drug overdose in 2009, has been open about her battle with depression and anxiety, and in 2013, she was hospitalised after attempting suicide. Paris later admitted she had tried to take her own life a number of times during an interview with Rolling Stone back in 2017.

"I was crazy. I was actually crazy. I was going through a lot of, like, teen angst. And I was also dealing with my depression and my anxiety without any help," she told the outlet. "It was just self-hatred. Low self-esteem, thinking that I couldn't do anything right, not thinking I was worthy of living anymore."

Paris Jackson Pulled Over for Speeding