In a statement posted to the company's Facebook page, the beauty chain announces its new 'We Belong to Something Beautiful' campaign that focuses on inclusion workshops for its staff.

AceShowbiz - Beauty chain Sephora will close its U.S. stores on Wednesday, June 05 for diversity training - just weeks after singer SZA accused one of their employees of racially profiling her.

Last month (May 2019) the "Love Galore" hitmaker, real name Solana Imani Rowe, tweeted about an incident that occurred as she shopped at a Sephora store in California.

"Lmao (laugh my a*s off) Sandy Sephora location 614 Calabasas called security to make sure I wasn't stealing . We had a long talk. U have a blessed day Sandy," wrote the Grammy nominee, who has reportedly previously worked at a Sephora.

The company responded to her comments on Twitter, writing: "You are a part of the Sephora family, and we are committed to ensuring every member of our community feels welcome and included at our stores." 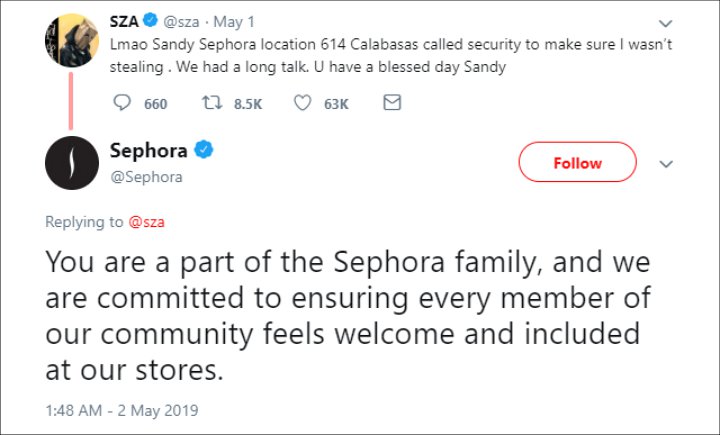 Now, in a statement posted to the company Facebook page, Sephora has announced its new "We Belong to Something Beautiful" campaign, which focuses on inclusion within its staff and toward its customers.

Sephora added it "will never stop building a community where diversity is expected, self-expression is honoured, all are welcomed, and you are included."

Company spokeswoman Emily Shapiro told Reuters in an email it was aware of the incident with SZA but claimed the training was not "a response to any one event."

She added that planning for the "inclusivity workshops" had been in progress for several months and that the "We Belong to Something Beautiful" campaign had been in the works for at least a year.

Last year, amid racial profiling allegations, Starbucks closed down all its stores for "racial bias" training after white employees called the police on two black men waiting for a friend.

"Go buy yo Fenty Beauty in peace sis!" wrote the "Kiss It Better" hitmaker in a handwritten note along with the thoughtful present.

SZA's Fan Exposes Her for Allegedly Lying About Personal Information

SZA Not Mad About Grammy Losses