Slammed for promoting 'Beverly Hills, 90210' reunion two weeks after his former co-star's death, the husband of Megan Fox reminds that 'everyone grieves in different ways'.

The former TV hunk, who is married to Megan Fox, has also been slammed for failing to post a tribute to Perry.

The criticism came swiftly after Green posted a video on Instagram, promoting the upcoming live podcast, on Thursday, March 14, and now he has responded to followers attacking him for appearing to brush off his castmate's death.

One fan wrote: "RIP Luke Perry! I'm not sure how you could do this (podcast) so soon. I haven't seen anything from you about his passing, maybe I've missed it somewhere. Pretty much everyone else had something to say...".

Brian responded: "@carriebristol thank you for your words. Thank you to everyone for sticking up for me but it's not necessary... Carrie, the passing of Luke is terrible. As was said by many, everyone grieves in different ways. If it's too soon for you to attend what is meant to be a fun night for the fans then you don't have to. Everyone should respect everyone's process." 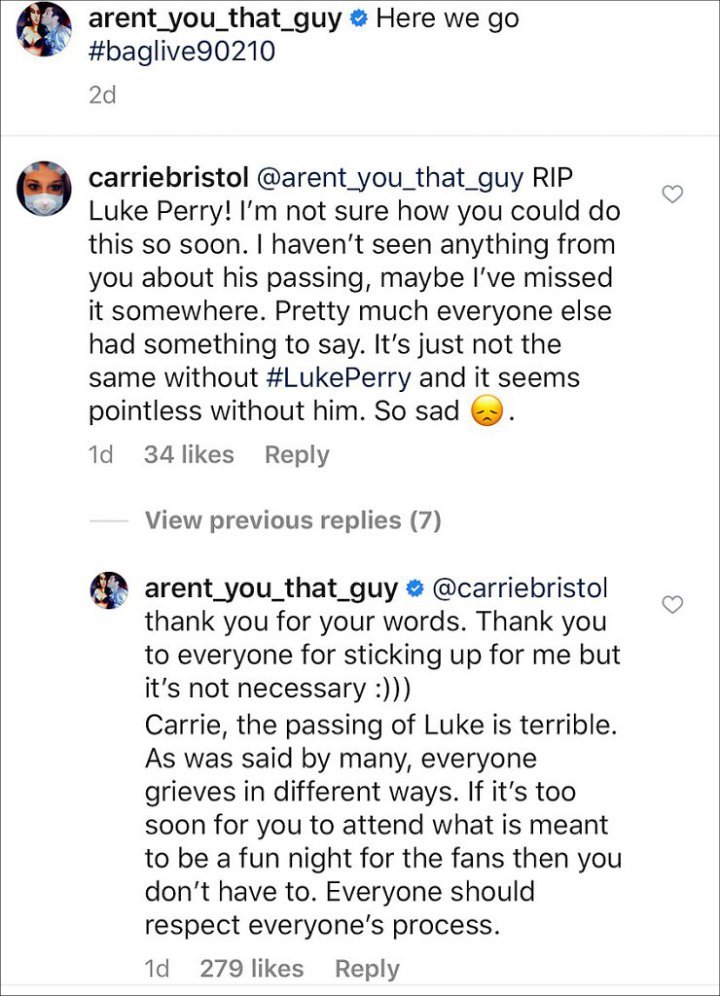 Castmate Jennie Garth was also attacked by fans for not paying tribute to Perry.

Instead she posted a photo of herself with her daughters on International Women's Day last Friday.

She later explained: "Hey everyone... I chose to post a pic of my girls today because they are my life. Because today is a day to celebrate all women. It took a lot for me to want to celebrate anything. I thought about it and I know that's the way my dear friend would have wanted it."

"His kids were his life. And anyone who knew him know that and knows he didn't give a f**k about social media... So please don't assume or judge or make rude comments. That's really uncool."

It's not clear who will be taking part in the "Beverly Hills, 90210" reunion epsiode of the Brian Austin Green Live podcast, which will be broadcast from Torrance High School on August 31.

The venue is extra special as it doubled as West Beverly High in the TV series.