'Awww, iggy is Broke,' Azealia shades the Australian star on Instagram, predicting that the 'Fancy' rapper will be back to Australia soon because of running out of money.

AceShowbiz - It seems like Azealia Banks is not going to stop coming at Iggy Azalea anytime soon. Iggy recently took to Twitter to endorse flat tummy teas and shakes, and her nemesis Azealia believes that the "Fancy" raptress is running out of money that she accepts any offers she can get including doing the ads.

In the mirror selfie that Iggy shared on Twitter, she could be seen flaunting her flat abs. Meanwhile, several packets of Flat Tummy Co.'s meal replacement shakes were seen on the kitchen countertop in front of her. "#ad Y'all can't even hate on it. @flattummyco's meal replacement shakes have gotten me more definition in my tummy without losing my ass, and they're 20% off RIGHT NOW," she captioned the snap.

#ad Y’all can’t even hate on it. @flattummyco’s meal replacement shakes have gotten me more definition in my tummy without losing my ass, and they’re 20% off RIGHT NOW. pic.twitter.com/7jYb7GmQcL

Azealia, who is still banned from Twitter for threatening to kill "Love & Hip Hop" star Mariah Lynn, took a screencapture of Iggy's post and shared it on her Instagram account. "Awww, iggy is Broke," she shaded the Australian star. "I remember when I had to do the flat tummy tea ads for a little weave money. Those were rough times..,,."

She went slamming the "Black Widow" hitmaker in full swing, "And she had the nerve to make fun of my soap. Yikes!" She referred to the time when she began a side hustle several years ago by making her own soaps and selling them online. Iggy, however, made fun of the products after Azealia dragged the former for canceling her tour multiple times.

"Never hating on a girls hustle, but I predict she will be moving back in with her parents in Australia soon," she continued. Directly tagging Iggy's account this time, Azealia wrote, "I can throw you a bone and pay you to promote the Kangaroo Jane shampoo bar if you're interested :)" 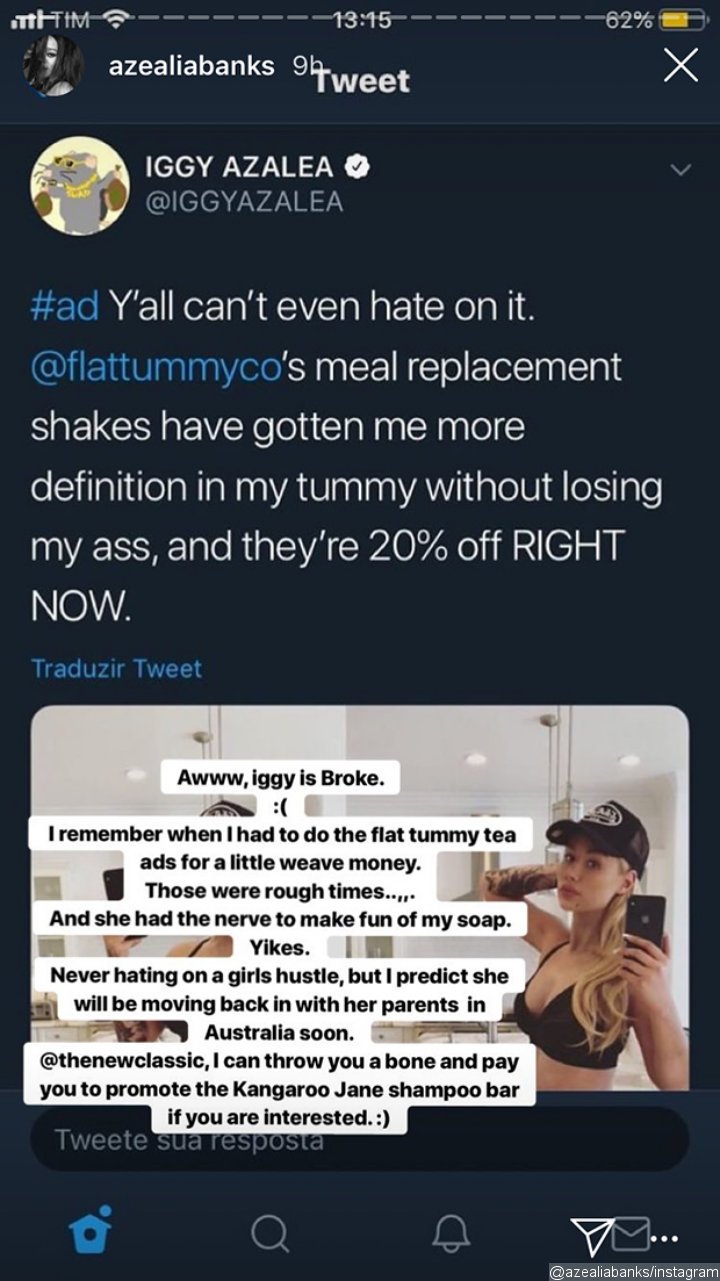 Iggy and Azealia have always been feuding with the latter giving the former the nickname "Igloo Australia" back in 2014. Azealia accused Iggy of appropriating black culture but when police violence against black people happens, she stayed silent.